Like its big sister, the Mélancholia guitar, the Dune model will offer a felted sound, rich and deep bass, extended middles and singing highs. What can I say, this is my favorite sound. However, Dune will lean more on the bass side than the smaller Melancholia, and will also offer more projection and volume. 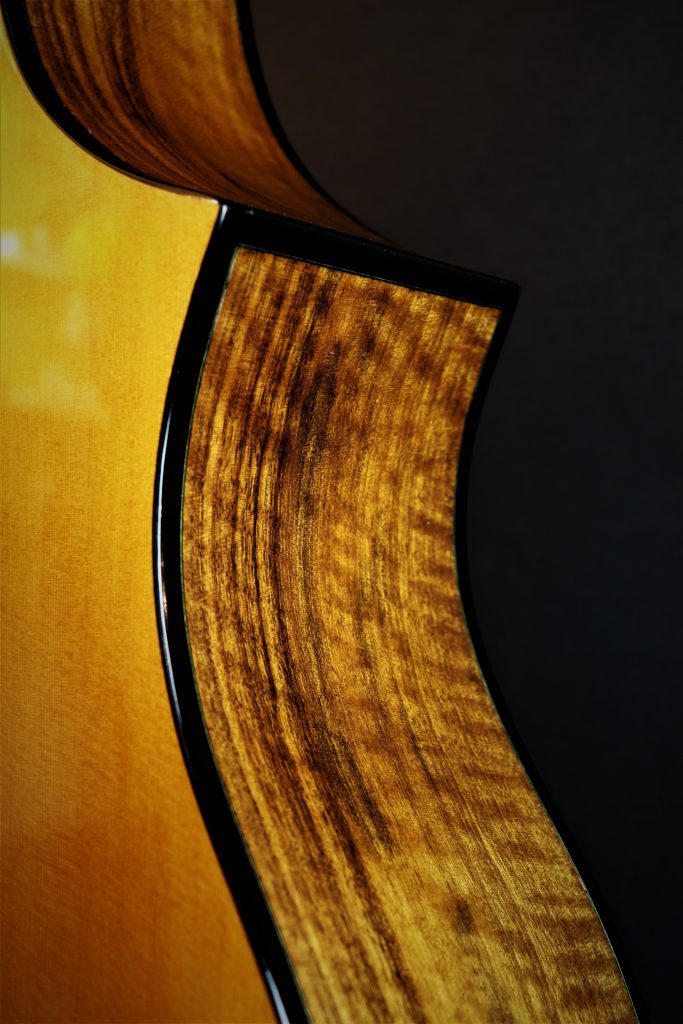 With the first version of this model, created in 2014, I wanted to invent an innovative guitar, and to explore new manufacturing techniques. Coming from a collaboration with my friend and maker David Degroise, during my second year of study, we drew into everything that amazed us about modern guitar making, and adding a few ideas of our own. Thus was born an instrument created and designed for nylon strings, but whose sound goes superbly better with steel strings.

Surprised by this result, I learned a lot about the structure of the instrument, its reaction to stress, and the creation of bracings.
It was in 2018, after putting it aside for a while, that I pickup the prototype and decided to make it into a model. A year later, in June 2019, I finished this model and had it tested for the first time by my clients. But in July 2019, a pipe from our first floor broke and flooded the entire workshop. I lose some of my moulds, and most of my guitars were good to throw away, including Dune.
So the photos you'll see here were taken just before the flood. But don't panic, Dune hasn't said his last sound, and a new version should be released soon.

Unlike traditional placement, the opening on the side allows for a return for the musician, to hear sound more clearly, and provides a more enjoyable playing experience

I voluntarily make sides of different heights to improve playing comfort. The side under the arm of the musician is thinner than its counterpart, allowing for a more comfortable position, and the resulting tilt gives a better view of the neck, while keeping a higher body volume than a more traditional guitar.

A small opening on the back provides access to the internal adjustment system, allowing you to change the height of the strings, so that you can fin tune for the perfect height. The adjustable neck also allows me to move the pressure of the neck, from the front to the internal block and lighten it to increase its response. Finally, this system allows me to easily disassemble the neck, in order to make maintenance and repair easier.

Ervin Somojie, Tervor Gore and Gerard Gilet, great names in contemporary guitar making, underline in their writings the poverty of the conception of the traditional background. Inspired by Kasha, an American acoustician, and his "live" back, I wanted to create a back correcting traditional flaws. I use the back to add depth, richness and sustain to the instrument. This feature provides me with an additional tool for adjusting the sound to the client's desire.

The result is a back that does not look different on the outside, but with a different conception of sound on the inside.